Planning a skiing trip? It’s important to choose the right time of year to pack up your skis and head to the mountains and you want to pick the best time to ski. You want there to be plenty of snow, you’d like good value for money and you want it to be busy enough – yet at the same time not too busy.

When do European resorts open?

Generally speaking, most mountains in Europe open at the end of November and close mid to late April, with the exception of Levi Resort in Finland, which stays open until early June, because of its cold Arctic temperatures. Most European resorts do not vary in the months they open, although a good rule to remember is that the earlier you go, the more snow you will get.

Whilst there is a risk of poor skiing conditions the later you go, on the plus side, the days will be longer and the closer you are to Easter, the more likely it is for the sun to be shining. These longer daylight hours mean extended lift opening hours, and ultimately more time to enjoy the après-ski activities that take place in the cafes and bars on the slopes.

When is it cheapest to go?

Prices can be almost double at peak times such as Christmas and New Year, and during the school holidays of Christmas, Easter, and particularly February Half Term, so if you can try and avoid these times, it will be a lot cheaper! January tends to hold the best deals for European ski resorts, so this post-Christmas season is a good time to go.

If you’d rather go at a less busy time, the best month to go skiing is January, which is also quiet and more peaceful, as people find they need to save money after an expensive Christmas! Importantly, fewer skiers on the slopes means that there are much smaller queues for ski lifts, which is a definite bonus as queues at peak times can be quite an annoyance for the eager skier! 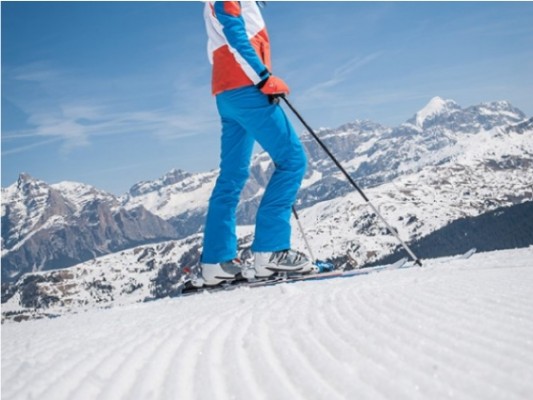 Top tip – when selecting which resort to go late skiing in, choose a ski resort with an altitude of 2000m or above. The higher the altitude of a skiing area, the colder it is, and so the snow lasts for longer.

The further into March you are, the cheaper it is to venture to European ski slopes. If you are going on your skiing holiday during March-April, reduce the risk of poor skiing conditions and pick one of the following destinations for more chance of snow:

All these locations have high altitudes and many are based by glaciers, making the snow last longer in the spring months.

Whichever month you end up choosing to go, we hope you have a fantastic skiing trip! Contact us for more information on our chalet availability!